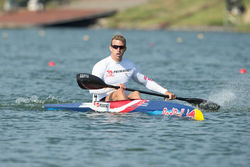 Danish kayaker René Holten Poulsen is a triple world champion and six-time European champion. He graduated as a carpenter but since 2011 he has professionally focused on sport. He trains two to three times a day, three months in a year he spends abroad on training camps. Combination of strong-mindedness and willingness to train more and harder than others makes him one of the best kayakers in the world. Not in vain he’s called Powerhouse Poulsen.

His biggest dream is to become an Olympic champion. So far he gained a silver medal together with Kim Wraae Knudsen on K2 1000 m in Peking 2008.

Two years ago he had won two gold medals in Račice at the 2015 European Championships. How is he going to do this year? Definitely he`ll belong among top favourites. 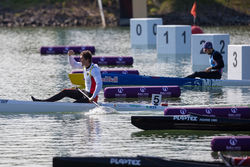 He tried football, karate and athletics before he has definitely decided to kneel into a canoe. German canoeist Sebastian Brendel has an impressive collection of medals from the Olympic Games, World and European championships – 23 golds, 8 silvers and 7 bronze in total.

He managed to defend his victory on kilometre in last year’s Olympic Games in Rio and added another gold medal in category C2 together with Jan Vandrey. In this season he hasn’t been as sovereign as he used to be, Martin Fuksa managed to beat him in this year’s World Cup on 1000 metres races. Brendel was even disqualified in the first race of this season. Their duel should be on of the top duels at the World Championships in Račice. Who’ll become the winner?