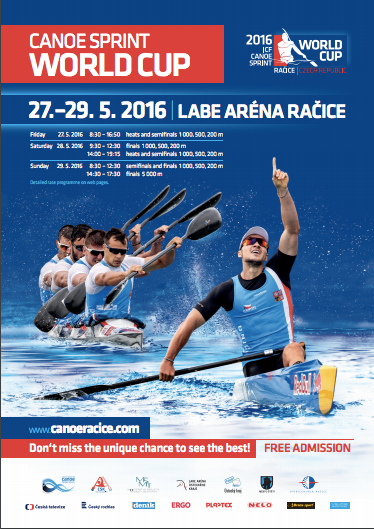 Uzbekistan, Moldavia, China, Japan or Cuba and Ecuador. Also these countries can be found in the list of attending counties for the ICF Canoe Sprint World Cup in Racice from 27 to 29 May this year. Already 632 team members from 38 countries are registered. The events will bring a few innovations. More you can read in this article.

Each national federation can enter two teams in each event. The biggest team will be send, of course, from the home country, which should be 50 team members, including athletes. It is followed by Canada with 36 members and Italy with 35 participants reported. Among the big teams we have to mention also Slovakia, Germany, Great Britain and Hungary. Also Kazakhstan with 29 members belongs among the bigger groups. Conversely, there is only one American who should arrive, three Kyrgyz and four South Africans.

During the race, which the National Olympic water sports center Racice hosts, Swiss Timing will test the use of GPS on all the ships. The aim will be to display results, the interim order, or splits, since the system will also be used at the Olympics in Rio. The same GPS system will then be used on other races of the World Cup.

Television broadcasts of Racice are going to be distributed in plenty of countries. We will specifically inform about this TV coverage. The program of the event is displayed on posters for World Cup in Racice. Also the German station ZDF showed an interest in broadcasting.

Admission for all visitors is free.
For current information, be sure to follow our facebook channel Canoe Račice.