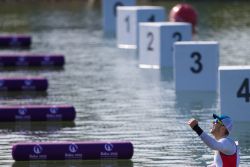 He has a particular relation to the Czech Republic. “I became a world champion for the first time here!” he recalled the triumph on the wildwater in Karlovy Vary in 2006. “But I really like Račice as well. The track is excellent, the service in recent years has greatly improved and the food here is good either.” He even got used to the most popular Czech drink: “Well, beer is not really my favorite drink, but in the Czech Republic it's almost an obligation to drink one.”

Nine years ago he competed for his medals in wildwater canoeing, however the dream of the participation in the Olympics was stronger. “Around year 2006, there were not so many strong canoeists on the 1000 meters track in Germany. I simply tried it and apparently it was not so disastrous after all,” laughed the five-time world champion at 1000 meters.

His bet on the canoe sprint paid off, in 2008 he qualified to Beijing and four years later, he returned from London with a bronze medal. “Now I want to win the Olympics! That remains my dream and my motivation for the training. Perhaps then I’m going to be old enough to say goodbye to the professional sports!”