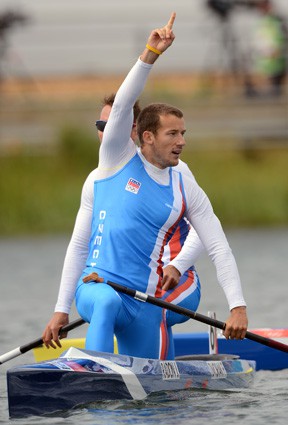 One of the biggest sports events in year 2015 in the Czech Republic will start in Račice exactly in four months. The organizers of the ECA European Canoe Sprint Seniors Championships expect around 800 participants from 40 countries to come to the region of Northern Bohemia. Also paracanoe races will take place in Račice.

„I believe that the Czech competitors will be as successful as in past season. The championship will be also a dress rehearsal for the World Championship, which will take place in Račice in 2017,“ Jan Boháč, the President of the Czech Canoe Union, said.

The ECA European Canoe Sprint Seniors Championships will start on April 30th with the opening ceremony. Races will go underway the next day. „It is very important for us that many Czech paddlers will be able to race in front of their fans,” Pavel Hottmar, Czech National Team coach, said.

The medalists from Brandenburg - Daniel Havel, Lukáš Trefil, Josef Dostál and Jan Štěrba (K4), as well as Martin Fuksa (C1) and Jaroslav Radoň and Filip Dvořák (C2) should be the main stars of Czech Team.

„I experienced only the World Cup races in the Czech Republic, so I am excited about the European Championship, because that`s another level of competition. My friends and my family will come to watch me. I would like to show them some good results. Too bad the Olympic Qualification doesn`t take place in Račice,“ Martin Fuksa, C1 500 meters European Champion, said.

Also other Czech paddlers like to race at Račice sports area. „Spring races are always harder for me, but I like the venue. Weather doesn`t influence the results. I`s also an advantage for us that we can have accommodation directly at the venue,” Josef Dostál, K1 1000 meters World Champion said.

Czech fans should be able to see him to race along his K4 teammates Daniel Havel, Lukáš Trefil and Jan Štěrba. „We are really looking forward to it, because home races are the cream of the crop,” Jan Štěrba, the most experienced member of the 2014 World and European Champions crew, said.

Also Jaroslav Radoň and Filip Dvořák praise the home venue, where they won two medals during the World Cup in 2014. „It is always exceptional to race at home. It`s great that we can experience the maximum comfort in Račice, which makes a huge difference,” Filip Dvořák said.